Sonex Aircraft – A Look Through an Aviation Insurance Agent’s Eyes 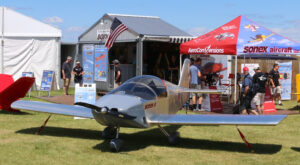 Hello, my name is Victoria Neuville and I am an aviation addict; so much so, that I turned it into a career. In my almost decade long career as an aviation insurance agent, my views of the aviation industry have formed differently compared to that of a career pilot. My profession, in addition to 15 years of flying behind me and recently becoming a flight instructor have introduced me to many great aircraft. One that has always stood out to me was the Sonex line of airplanes.

At first introduction at EAA AirVenture/Oshkosh years ago, the Sonex almost appeared like a toy to me. It was smaller than what I was used to flying then and its boxy build had me curious who was flying these things. I noted, however, that the low build cost could not be beat! It was not until I started speaking regularly with those that have built and flown a Sonex aircraft that I became convinced this experimental aircraft was something special. When Robbie Culver, president of the Sonex builders Foundation asked me to contribute to their newsletter, I knew I had to give Sonex pilots and owners honest feedback on the status of the Sonex aircraft through the insurance industry’s eyes.

As you may have heard, the ever-cyclical insurance market has entered a period of rising premiums with increasing restrictions and training requirements. This is the result of an insurance market saturated with aviation underwriters fighting over your business with one sole bargaining tool: price. The market would not have remained viable without increased rates and a focus on increasing safety. These increases have hit homebuilt, tailwheel, retractable gear aircraft and rotorcraft the most. Increases are averaging 10-30% and sometimes more.

Zeroing in on the Sonex specifically, despite over 600 kits completed, it can be difficult to locate a CFI with Sonex experience to provide the required insurance checkout. Often, a CFI’s Sonex time is minimal. In addition, dual instruction is not possible in the single seat Onex or SubSonex. As single experimental aircraft generally are not available, it is nearly impossible to build time in a non-owned Sonex prior to the completion of a build. Quality of training and pilot experience play a large factor in the underwriting of this aircraft. Hence, you will see new-to-Sonex pilots paying a heftier rate compared to that of a seasoned Sonex flyer. As the aircraft popularity grows, hopefully these hurdles will become a thing of the past.

The good news is that aviation is always evolving, and with that, pilots. If we as a group place an emphasis on training and increased safety perhaps the rates will eventually reflect the incredible value of these homebuilt aircraft.

If you are looking to build or purchase a Sonex aircraft, Aviation Insurance Resources (AIR) shops all the major aviation insurance markets to obtain the best available rates on your aviation risk. Call 301-682-6200 or apply only today to obtain a competitive quote from a knowledgeable agent and pilot!