Soon, thousands of pilots and aviation enthusiasts will gather on the grounds of Wittman Regional Airport in Oshkosh, WI for the 2015 EAA AirVenture. Featuring over 10,000 aircraft and a daily airshow, Oshkosh is the place to 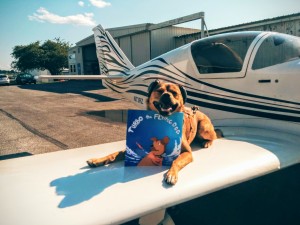 be in July! Are you ready for all that it has to offer?
The pilots and agents at Aviation Insurance Resources (AIR) are getting excited to meet current and new clients at friends at the world’s largest airshow. Visit our booth in Building A, #1120 to receive the best aviation insurance rate and an Oshkosh-only special offer!
Special Oshkosh Offer:
In December 2012, Victoria Neuville Zajko, a commercial pilot and insurance agent at AIR flew to West Virginia to adopt a puppy from a local rescue. Turbo was the only appropriate name for the pup, who took to flying right from the beginning. Turbo loves to be in the air and is closing in on 100 hours logged in flight.
Inspired from Turbo’s real-life story, Zajko teamed up with newspaper publisher and friend Kelly Kennedy to create a children’s aviation book series, Turbo the Flying Dog. The first book tells shelter dog Turbo’s “tail” as he discovers he will finally have a new home and a family, but learns he must first get there by plane. Turbo has never seen a plane before, let alone flown in one, and as the story unfolds he discovers that he just may enjoy flying! Turbo’s second book, Turbo Learns to Fly, will release just in time for Oshkosh allowing young readers to follow Turbo as he takes his first flight lesson.
Victoria will be in the AIR booth with copies of books one and two from the Turbo series. She is offering a $2 discount on book purchases to those who request an aviation insurance quote during the show.
More about Turbo:
Authors Kelly Kennedy and Victoria Zajko describe the book as a light-hearted adventure for children ages four to eight focused on rescue, family, and aviation. Illustrated by Michelle Zajko, the bright colors and illustrations mimic the real Turbo and his aviation surroundings.
To learn more about the Turbo series, visit www.turbotheflyingdog.com. You can also follow him on Facebook, Instagram and Twitter!
More about AIR:
All agents at AIR are pilots and come from a strong background in aviation. When you call AIR, you will always find yourself talking to a person who is as excited about your aircraft as you are. Whether you are looking for flying club insurance or flight school insurance, Cessna 150 insurance or King Air insurance, all of our agents at AIR will take your needs personally as if it were their own.
AIR works with all the major markets to obtain the best rates at the broadest coverage available. To save time and money on your aviation insurance please contact Aviation Insurance Resources by calling 877-247-7767 or visit AIR-PROS.com today to receive your aircraft insurance quote!
You can also follow us on Facebook, Twitter, LinkedIn, Instagram and Google+.
Stop by our booth at Oshkosh: Building A, #1120 to hangar fly with us!