With the flexibility to be equipped on wheels, floats or skis and perfect for bush adventures or just cruising with friends and family, the Cessna 180 is one of the most versatile tail wheel aircraft. Introduced in 1953 and later dubbed the 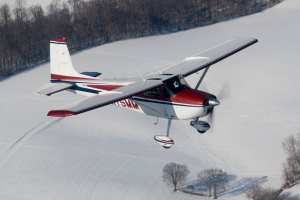 “Skywagon” the Cessna 180 has been soaring through the skies as a pilot favorite for over 50 years.
If anyone doubts the capabilities of the Cessna 180, just let them know that the first woman to fly solo around the world did it in a Cessna 180. Geraldine “Jerrie” Mock departed in N1538C, The Spirit of Columbus, from Columbus, OH in April of 1964. Jerrie flew into the history books after 29 days of flying a total of 22,860 miles. The aircraft now hangs in the National Air and Space Museum.
“The Cessna 180 Skywagon is one of the best planes that Cessna has ever produced. Of all the aircraft I have owned over the years, the Cessna 180 is one of my favorites,” says Jon Harden, President of Aviation Insurance Resources (AIR) and member of the International 180/185 Club.
Aviation Insurance Resources (AIR) specializes in aircraft insurance. With over 34 years of aircraft insurance expertise, AIR will save you time and money on your Cessna 180 insurance. Just check out or ad in the Skywagon newsletter, or fill out an online quote request here!
To learn more about how Aviation Insurance Resources can assist you with your Cessna 180 Skywagon insurance please call 877-247-7767 or visit AIR PROS.com today and receive your insurance quote! You can also follow AIR on Facebook, Twitter, LinkedIn, and Google+.