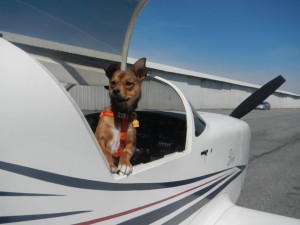 You already know that Aviation Insurance Resources (AIR) offers a wide range of aircraft insurance options for aircraft of all makes and models, from Cessna Aircraft, Beechcraft, and Cirrus Aircraft to Robinson Helicopters, Piper Cubs, and Corporate Aircraft. But did you also know we are aviation enthusiasts ourselves? The AIR family enjoys getting out there and soaring the open skies. Sometimes we even bring our favorite four-legged friends along for the ride!
AIR’s own Victoria Neuville has been seen flying on several occasions with her spaniel mix, Turbo, and pet hedgehog, Quillson. Below are Victoria’s accounts of two of those flights.
Turbo’s Big Day
“The flight started out of Frederick around 12:30,” remembered Victoria. “We had a 38 knot direct headwind most of the way. Crossing over the mountains we could see lenticular clouds to our west and experienced many updrafts and it became quite choppy. It was clear most of the flight until we encountered some snow about 20 miles out from our destination. We were quickly through it, however, and landed at Braxton County Airport (48I) in West Virginia.”
It was at this airport that Victoria first laid eyes on her new puppy. Victoria was greeted by two male puppies, one brown and one white, from Dustin’s Angels pet rescue. As Victoria remembers, the people from Dustin’s Angels thought it was “so cool” that one of their puppies was being rescued by plane.
After picking her puppy, a dog that would soon be named Turbo, and signing the contract it was time to take some photos and head back to Turbo’s new home.
“My first intention when adopting a puppy was to slowly get them used to the aircraft, but to avoid a 3 1/2 hour drive, the flight was worth it,” explained Victoria. “As it turns out, Turbo did fantastic. He perked up and looked around when the plane started but slept a majority of the time.”
After several more flights with Turbo, Victoria designed her very own “Emergency Bag,” with everything she would need in case of an animal accident in the aircraft. To build your own emergency bag, read Victoria’s personal blog, “’Emergency Bags’ for Flying Fidos.” 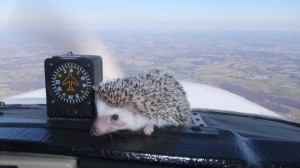 A Hedgehog Takes Flight
During the weekend of Victoria’s Uncle Tom’s 60th birthday, the family took a quick, half hour flight to Smoketown, Pennsylvania. Uncle Tom and his family were insistent that Victoria bring her pet hedgehog, Quillson. Victoria agreed to bring her prickly pet along and, much to her surprise, Quillson really enjoyed flying.
“He did not roll up into a protective ball, he did not huff to scare the airplane away,” remembered Victoria. “In fact, he explored and enjoyed being out of the box and feeling the gentle vibrations of the plane.”
Both of Victoria’s pets have flown in Cessna and Glasair aircraft insured by AIR.
To find out more about Flying with Pets or Aircraft Insurance, please contact Aviation Insurance Resources by calling 877-247-7767 or visit AIR-PROS.com today to receive your free Aircraft insurance quote! You can also follow us on Facebook, Twitter, LinkedIn, Pinterest, and Google+.
Sources:
The Flying Hedgehog
A Puppy Pick Up Flight
“Emergency Bags” for Flying Fidos