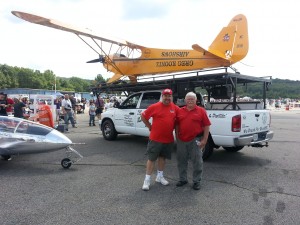 Aviation Insurance Resources (AIR) agent Jon Shimer recently attended the fifth annual Greenwood Lake Air Show in West Milford, New Jersey. Shimer was one of nearly 21,000 attendees, the highest attendance ever for the three-day event. The previous record for the Greenwood Lake Air Show was roughly 17,000, back when the event was only a two-day affair.
“The show definitely topped those in years past,” said Greenwood Lake Airport manager Tim Wagner. “We had such a variety [and] all of the performers were so interactive with the attendees. We had so much stuff on the ground too. It was just tremendous.”
The Greenwood Lake Air Show featured a car show, kids carnival, live music, and, of course, numerous aircraft and nationally recognized performers, such as five-time U.S. National Aerobatic Champion and two-time Red Bull Air Race World Champion Kirby Chambliss – 2012’s headliner- Jerry McCart and his F-5 fighter jet-engine-powered funny car, Justin Lewis and the world’s smallest jet – the 860-pound FLS Microjet –the Commemorative Air Force brought a rare P51-C model Mustang, the Iron Eagle Aerobatics team, and Greg Koontz’s Alabama Boys Comedy Team.
The Alabama Boys include Fred Masterson as Uncle Fred, Walter Harvey as Grandpa, and Jason Hankins as Instructor Bob, with AIR agent Jon Shimer doing the narration.
“He (Koontz) invited me to help be a “Grunt” after the Lock Haven, Pennsylvania, Sentimental Journey Piper Cub Fly-In Show,” explained Jon. “I have been announcing as Forrest Cleaver when Greg does the flying farmer act in the Piper Cub and lands on the truck.”
Jon was in Oshkosh, Wisconsin for EAA Airventure, the Grand Daddy of Airshows, and then the Greenwood Lake Airshow in West Milford, New Jersey. His next appearance is in Memphis, Tennessee September 26-30.